Nov. 2009: “You would not entrust an old cooking pot to the care of a friend or associate.” – Ganda (Uganda) Proverb 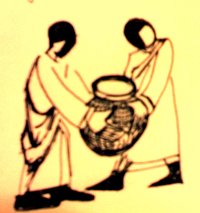 African Proverb of The Month
November 2009

You would not entrust an old cooking pot to the care of a friend or associate. (English)

One tends to treasure items or people that have for so very long been of tremendous value to him or her. Ownership or association with particular things or people often begets genuine experience, attraction, cherishing and overall appreciation of such. The long-time owner becomes regarded as the one who is best able to understand, handle, associate with, look after or preserve such items or people he or she treasures. Items or people (such as close relatives and friends) are likened to “a cooking pot that is old” (ssentamu nkadde). The traditional cooking pot of the Baganda people is molded from earth, and it can easily break if not handled carefully. If that pot weathers the storm and becomes used over and again, it becomes regarded as precious and remarkable even after it becomes quite delicate and very close to crumbling. The one who owns and has used the pot over and over again is regarded as the one who is experienced enough to best handle and value the pot, despite its advanced age and fragility. The owner of the old fragile pot would shudder at the prospect of ever entrusting the pot to someone else. The fear that the pot would easily get broken, become misused, depreciate very fast, or even get stolen, would be apparent. The sentimental value of the old pot would not be worth that risk of entrusting it to another person.

The word, “Ssentamu” in the Luganda language translates as “large or big pot.” The Luganda personal masculine name “Ssentamu,” often shortened to “Sentamu,” originated from this proverb. Those named Ssentamu or Sentamu are prevalently of, or associated with, the Mbogo (Buffalo) clan, one of the most populous clans of the Baganda people in Uganda. Ssentamu nkadde, togiteresa munno is Proverb No. 4964 in Ferdinand Walser, Luganda Proverbs (Kampala, Uganda: Mill Hill Missionaries, 1984).

In this forum, and in countless others all over the world, the Bible of antiquity is the central point of reference. For hundreds of years the Bible has consistently remained the world’s bestselling book. For the steadfast Christian or believer, the Bible is necessarily within his or her reach all the time. No erstwhile believer would entertain the idea of entrusting his or her Bible to the care of a comrade or friend. The Bible ought to be in close proximity to the Christian. Many are known to have written valuable notes in old Bibles that they have had for many years. The Bible represents words of Christian religious messages and wisdom and even law carried down from centuries ago — messages that are continuously built on and interpreted. Inevitably, the Bible is the proverbial old cooking pot that one would not be comfortable with abandoning in favor of entrusting it to the care of someone else.

Further, the Old Testament did not become irrelevant when the New Testament became written. The two serve together as the Word of the Lord. They are meant to always be within constant reading reach of the believers as sources of strength, morality, and stability. Similarly, God is the foremost progenitor and Creator so believers are obligated to constantly have God in their hearts instead of storing away His presence. Moses’ delivery to the assembly of Israel recounts the value of the past and of God: “Do you thus requite the LORD…? Is not he your father, who created you, who made you and established you? Remember the days of old, consider the years of many generations. Ask your father and he will show you; your elders, and they will tell you” (Deuteronomy 32: 6-7).

There is also reluctance to entrust or lend out personal items that may not only be old and valuable, but may be the only ones the owner has. People can be reluctant to entrust old things that they value, without a pledge. Exodus 22:26-27 hints on this message: “If ever you take your neighbor’s garment in a pledge, you shall restore it to him before the sun goes down; for that is his only covering, it is the mantle for his body; in what else shall he sleep?”

This proverb of the Baganda people of Uganda carries the message of obligation for people to continuously look out for and take care of those they have been positively associated with for so long, particularly relatives and friends. The association over the long run builds up to an old and outstanding treasured relationship that would negatively impact those involved if it were discarded or ignored. The proverb applies to aspects like antiques, old but significantly memorable pictures and notes and implements that have over time far surpassed their estimated longevity and worth. It also applies to elderly or aging family members. People often become uneasy about entrusting elderly relatives to the care of non-relatives or people they are not familiar with. People would rather take care of their elderly. Museums and museum treasures are heavily preserved and protected. They are akin to old cooking pots. Cherished things or people that are old and fragile warrant extremely close care. An old cooking pot can also represent a uniquely experienced person who has been in the place or occupation for so long that incentives are constantly presented to him or her to stay put in the same place and not leave and settle or work elsewhere. The universal proverb, A new broom sweeps clean, but the old one knows all the corners corresponds to this situation.