Nov. 2000: ” The eyes of the trapper are as subject to reddening as those of the small animal (that he pursues).” – Ganda (Uganda) Proverb

African Proverb of the Month
November, 2000 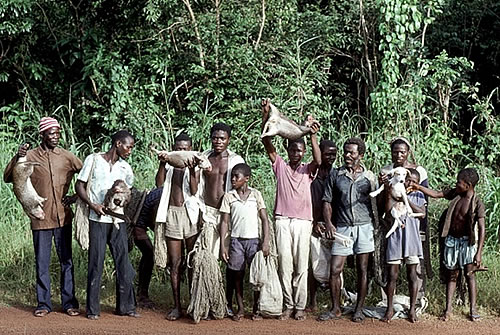 Explanation and Everyday Use

This is a renowned and intriguing proverb of the Baganda of Uganda as is evident by the extent that it has been documented. Further, the names Maaso (f/m) “eyes,” Gamyuka (m) “the eyes that redden (or pale),” Mutezi (f/m) “animal trapper,” and Kasolo (m) “small animal” are common personal names.

The proverb can be interpreted in a number of ways. The situation is of a small animal doing its best to run and escape from the hands of the bigger and stronger hunter who is pursuing. But in the process both the eyes of the trapper and the small animal are becoming red as the adrenaline pumps from tiredness. In the chase the person’s eyes are reddening as a result of the possibility that he or she may not catch an animal for food that day. The animal’s eyes are also getting bloodshot as a result of fright at the prospect of getting caught and killed. It goes to show that people and indeed all creatures (in this case mammals), great and small, despite their apparent differences, all experience similar emotions, strengths and weaknesses. They react similarly in many ways whether they are kings, queens, dignitaries, middle-class persons or commoners. 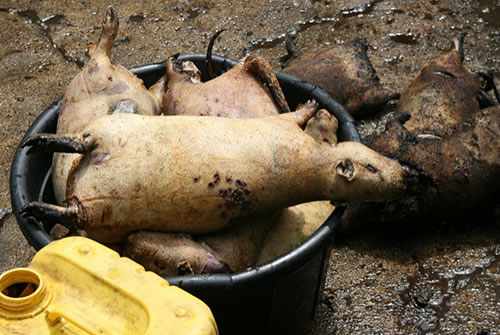 All people virtually have the same biological and psychological systems, and the Bible emphasizes the requirement for us to sympathetically address the needs of people in any kind of trouble whether these people are apparently big or small, famous or infamous, rich or poor. Pain and suffering are here and now involved with daily living.

Another interpretation of the proverb is that when you get the chance to punish or hurt a person that gave you so much trouble, then you will likely make use of the opportunity to do so. This is synonymous with “An eye for an eye and a tooth for a tooth” (Matthew 5: 38), “Tit for Tat,” “To pay back with the same coin,” and “If one hurts you, you hurt him or her.” On the other hand, Jesus emphasizes the requirement for us to “Go the extra mile” (Matthew 5: 41), that is, to be less inclined to revenging and punishing and to be more inclined to understanding and forgiving, towards upholding and mending human relationships. “To love one’s neighbor as oneself” (Matthew 19:19) is to be disinclined to punishing bad with bad. It brings us to another interpretation of the proverb. It says that one who unreasonably punishes another is often directly or indirectly punishing himself or herself. Moderation and compromise in human relationships become the key to happiness.

Another interpretation of the proverb is that after you work at a task that is so tiring, you will rejoice when you later realize impressive gains from your labor. A slothful person is more likely to drift into sinful ways than a hard working person who is often more disciplined. Laziness is discouraged in the Bible and by societies all over the world.

Contemporary Use and Application

This proverb is chiefly used to point to others who unduly emphasize their pains and other problems that as living things we are all subject to afflictions that come in different forms. Physiological and psychological pains are part and parcel of the mighty and the downtrodden, the privileged and the underprivileged, good and the evil beings, the young and the old, and those who are apparently happy or sad. Grass is therefore not always greener on the other side. The proverb essentially emphasizes that we should all be sensitive to the fact that we all go through forms of difficulties so we should not presume that we are the ones in most pain, or that those that appear to be comfortable in their living are not in need of help or consideration. In relation to the proverb, at the end of the day the pursued small animals (that were lucky enough to escape) are just as in need of water to quench their thirsts as the much bigger hunters that were pursuing them. Because humans, as living things and as a collective, go through similar pains and emotions, then the compromise is for them to work together as they look out for each other.