Apr. 2010: “The reddish-brown biting ant that breaks away from the trail is the one that turns into the big black ant.” – Soga, Ganda (Uganda) Proverb 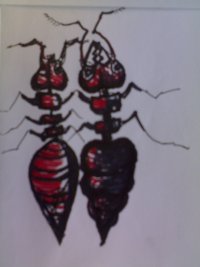 Red and black ants standing together

African Proverb of the Month
April 2010

Tiny reddish-brown ants (nsanafu) that distinctively move rapidly, and bite piercingly and venomously, are abundant in the millions in many parts of the African tropics. These dreaded raiders eternally move fast in orderly wide and lengthy columns. Should these columns be disturbed, the ants will become agitated and disorderly, and furiously descend upon the perpetrator, delivering their sharp hooked and poisonous bites. The nsanafu have even been known to kill human adults. They periodically appear to emerge from nowhere, and they can invade crop gardens and thatched huts.

Even the more intriguing is that the procession of the orderly columns of these reddish-brown ants is almost always flanked by the solitary presences of fierce looking large jet-black-shiny ants that are rotund and can grow to an inch in length. These large and imposing foraging ants (the kabasa, kaasa)  give the aura of being perplexed, angry, dumbfounded, and mocking or challenging the nsanafu. The smaller nsanafu are capable of eating through hollow broken stem residences of the much bigger kaasa, but the two sub-species do not directly attack each other. The big kaasa emits a signature strong musky, pungent and nauseating odor that travels for a remarkably long distance, often when provoked and injured. The kaasa is nicknamed the “stink ant.” This mysterious and legendary kaasa (paltothyreus tarsatus) has been the subject of extensive scientific investigation. Its powerful odor is said to be a defense mechanism and an attractant. The kaasa is also a scavenger, its presence linked to scavenging for dead ants along the trail (mugenderero, mugendo), and to feeding on termites.

In this proverb of the Basoga and Baganda of Uganda who live in the environs around the northern shores of Lake Victoria, the nsanafu are hailed as the tour de force because of their strength in numbers as well as their familial and orderly cooperation. The kaasa images the deserter, the ant-relative that metamorphosed from the small ant. The big kaasa, in contrast with the nsanafu, is solitary, reclusive, arrogant, monopolistic, uncooperative, ugly, nauseating and belligerent. The kaasa negates the African tradition of communalism, and of recognizing strength in numbers and cooperation. Despite its enormous strength and ability to survive, the kaasa is despised and frowned upon. Nsanafu are smaller, but they ably protect themselves; they survive and overwhelm imposing environments and creatures by working together. The little one that separates from the worthy formidable group proverbially turns into the kaasa.

Christians, just like the traditional African societal structure, find strength in numbers. Christians encourage, reassure, educate and protect each other based on the principles, morals and ethics of the biblical word of the Lord Jesus Christ. Those who desert the church community are vulnerable to taking on sinful satanic characteristics. Paul offers instruction, for staying in line, in his Second Epistle to the Thessalonians (3:6): “Now we command you, brothers and sisters, in the name of our Lord Jesus Christ that you withdraw yourselves from every brother or sister that walks disorderly and not after the tradition which they received from us.” Communities of ants are universally legendary for their industriousness, ingenuity, speed, and cooperation and have for centuries often been touted as role models. “Go to the ant, though sluggard, consider her ways and be wise: who having no guide, overseer, or ruler, provides her meat in the summer, and gathers her food in the harvest” (Proverbs 6:6-8). “There are things which are little upon the earth, but they are exceeding wise: the ants are a people not strong, yet they prepare their meat in the summer” (Proverbs 30: 24-25).

Contemporary Use and Religious Applications

Logically, the cooperative and sociable ants (exemplified by the nsanafu) are the model for human and Christian co-existence and cooperation. The rebellious and solitary big ant (kaasa) is obligated to employ extreme and offensive measures to survive, and is quite vulnerable to dangerous and negative influences given that he stands alone. This proverb is often mentioned among the Basoga and the Baganda, often in reference to those who have considerably deserted their traditions, their groups, their communities, their societies, their families or their religions in favor of adopting counterproductive practices and groups.

Legitimate Christian community and instruction gives opportunity for the believer to discern what is the right path and which directions are of false religiosity and immorality. God requires us to follow in his word and footsteps, just like the nsanafu dedicatedly do, and not to go astray and be isolated like the kaasa do. The northern Uganda rebel guerrillas of the Lord’s Resistance Army (LRA), despite their title which might suggest Christian affiliation, are lucid examples of the big rebellious kaasa ant. The havoc that the LRA has wrecked on the lives of innocent villagers in Uganda, Sudan, DRC, and Central African Republic and beyond for many years involves a trail of killing, capturing, plundering, maiming, kidnapping, and indoctrinating.

Two related Ganda proverbs that also come to mind toward heralding the value of human cooperation and togetherness are: Abayita ababiri, bejjukanya (People who move around in pairs remind and caution each other) and Kamu kamu, gwe muganda (One by one, creates a bundle).