August 2014 Two calabashes floating in a basin of water will touch each other, but not damage each other. Ewe (Ghana, Togo, Benin, and Nigeria) Proverb 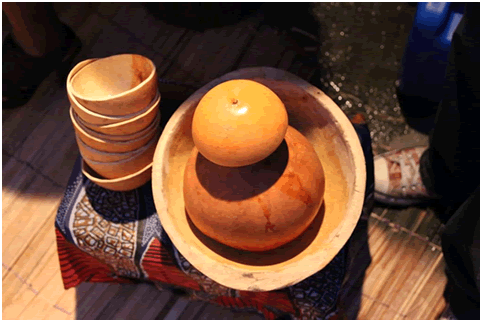 Contrary to the common assumption by some scholars that proverbs are dying out in many African societies and communities, this writer has found out that proverbs are very much alive and thriving among many Ewe and many Ghanaian communities very well. As seen in the Nigerian movies also, they are frequently used by even relatively younger age groups around 20 to 40 years. They are used to illustrate and highlight some points in a conversation or to summarize issues that are too sensitive to be spelt out in naked words. In this particular case of two calabashes floating in a basin of water, it is used as a metaphor for a peaceful mutual co-existence in life. It is recognized that differences are unavoidable even among the most intimate couples. Whatever the case, couples should be aware of this situation to find peaceful ways of resolving their differences without destroying each other. Similar proverbs are said about twins that even twins do have their differences. The Ghanaian proverb about crossed crocodiles also allude to similar situations: that they have a common stomach and therefore it doesn’t matter which one eats the food, both of them should be satisfied. However, they do fight for food because of individual tastes. This means that in marriage the couples should exercise caution not to destroy each other during strife. Just like the calabashes floating on top of water, they touch each other but do not damage each other.

“By wisdom a house is built, and through understanding it is established; through knowledge its rooms are filled with rare and beautiful treasures” (Proverbs 24:3–4, NIV).
“Do two walk together unless they have agreed to do so?” (Amos 3:3, NIV).

In contemporary society, divorce rates are going very high all over the world with Africa as no exception to the high divorce rate. It may be assumed that the divorces are occurring because the couples have not been able to resolve their differences amicably like the two calabashes. It is therefore expedient for the church elders, leaders and preachers to use the relevant African Proverbs in their teachings and preaching as advocated by Joshua Kudadje in his book “Proverbs for Preaching and Teaching.”

Explanation and Photographs by: