Apr. 2012: “When the crocodile jumps around he ends up by receiving the spear. Subi (Tanzania) Proverb 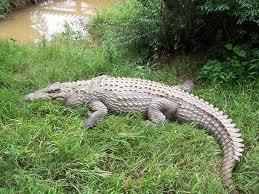 African Proverb of The Month

The Subi people live in the districts of Biharamulo and Ngara, on the North West of Tanzania. In the ancient past, they were coming from Rwanda, but they fixed themselves around the areas of Ngara, Chato, Rukora, Buziku and Bwanga. Slowly they spread to the East. The majority were living among the ethnic groups of Wahangaza and Washubi, some close neighbours. In former times, in the district of Biharamulo were kings of the Basubi. Basubi were especially hunters and honey collectors in the bush. Close to Lake Victoria in Buzilayombo and Chato they were also fishing.

This proverb doubtlessly comes from the fishing community of the Subi. Fisherfolk are used to throwing their spears everywhere in the attempt to catch some fish. Now when the crocodile plays, roams and jumps around endlessly (and also perhaps aimlessly), it will sooner or later get the spear from the fisherfolk. It is exposing itself to some danger by appearing sometimes here, sometimes there. The proverb explains that in the same way the person who goes around playing with his or her life without working with any particular aim in mind will sooner or later get the bitterness of loss. Like in many proverbs it is a call to prudence, but also an invitation to keep in mind what is most important and to be focused in activities.

This proverb may remind us of the lost son of Luke 15 who leaves the safety of his father’s house in order to follow the foolishness of this world. The result is the pinch of hunger and misery which compels him to go back home. Surprisingly similar would be the wealthy fool of Luke 12: 16-21 who works hard to get plenty and build accordingly. Unfortunately in his envy to enjoy the plentifulness of possessions he forgets to care for his soul and died abruptly losing both the wealth of this world and his relationship with God.

The message of the Gospels goes beyond the one of this proverb. Indeed, there is an invitation to stillness and focus, but this is not only in order to avoid danger and death from this life, but also in order to gain eternal life. It could be summarized in Matthew 6: 33: “Seek first his kingdom and his righteousness, and all these things shall be yours as well.” The meeting of Jesus with Martha and Mary in Luke 10: 38-42 explains further. One may be busy with so many things but only one really matters, and there is no question as to deprive the person who cares for that particular thing. We may also remember the quote of Pascal the philosopher: : “All the miseries of this world have only one root cause and it is that human beings are not able to rest quietly, peacefully in their respective dwellings.”

This proverb is particularly well adapted for teaching or advising the youth. While there are so many worldly temptations, it reminds them to be keeping in mind a direction, a compass, an overall plan in order to succeed. There is a saying explaining that the person who fails to plan his or her life is in fact planning to fail it, as that person will have a hard time discerning what is worthwhile to follow from what is not. This proverb may invite one to ask oneself and respond to some foundational questions such as “what is it that I really want in life?” “what is it that is really worthwhile?” and its consequence “what should I do to obtain it?”

The Christian Churches in Africa, like any other institutions, have to follow particular pastoral policies or targets for implementations. It is simply not possible to go in every direction in the same time. To choose may be painful, it remains necessary. Each parish, each diocese has the duty to develop pastoral plans according to priority needs in a particular context.

A valuable help is found in religious congregations.  Each has a well-defined gift or charisma to contribute to the Universal Church. This charisma is connected with the inspiration of its founder and with its apostolic beginnings, and is continuously developed throughout the life of the institution.

NOTE: This Subi Proverb was researched and originally written by Catechist Joseph Nkumbulwa of Bukoli Parish in Geita, Tanzania. He died in March, 2012. We post this Subi proverb in his memory. We thank him for his dedicated research and writing over many years as a loyal member of the Sukuma Research Committee. May he remain one of our ancestors in Christ, one of our “living dead.”